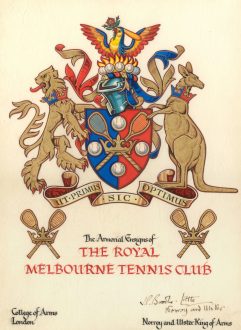 The Club has standing Subcommittees generally chaired by a Committee member. All Members are invited and encouraged to contribute to the Club by serving on a Subcommittee.

An Annual General Meeting is held at the Club, normally in May each year. Notice of an AGM is provided to members by the Honorary Secretary at least 21 days before the meeting date.

At each Annual General Meeting the members of the Club:

The RMTC is a company limited by guarantee.

The objects of the Club are to:

The Royal Melbourne Tennis Club is committed to protecting the privacy of members’ personal information. We have in place a privacy policy which explains how the Club manages the personal information that we collect, use and disclose. A copy of the Club’s Privacy Policy is available here or from the office