But hang on a minute, how did we even get here?

As many of you already know the North African Tennis Tournament (NATT), hosted by the RMTC, is quietly regarded as one of, if not the most eclectic handicap doubles tennis tournament held anywhere in the Real Tennis world.

The North African (for short) is a round robin style competition with its own set of unique and some would say most unusual rules, such as the incorporating and awarding of a ‘Farouk’, (should one side be three games down in a timed 25 minute match – and such Farouking must be called boldly and loudly at just the appropriate moment!). A Farouk being a half bisque handicap addition in favour of that team which will annul the opponents second serve or cancel a chase, for example. But you’d better be on the ball! Then there is the ‘Gadhafi Adaptor’ where, should a team be down by four games, in addition to the Farouk gained before, a handicap adjustment is made to one or either teams – in the middle of the match!! 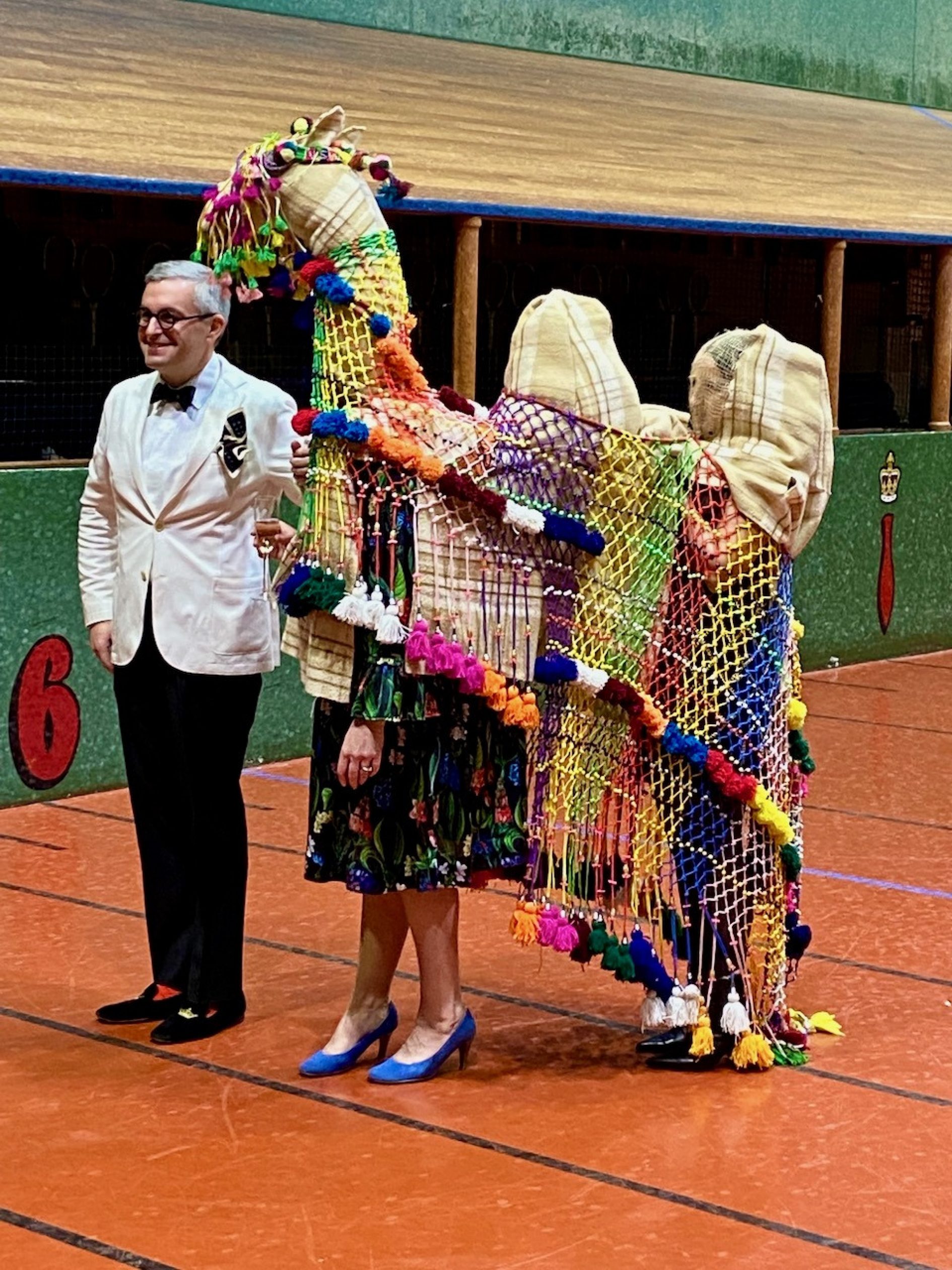 And this year the very appreciative audience were also treated to a fabulous if somewhat rare beast known as the ‘Assyrian Decider’ where with astute use of the rules to gain a ‘Farouk’, the defending champions from last year (Dianne Rennard and Geoffrey Nette) were able to come from behind in a 1-4 down position to snatch a 6 all draw just as the timer buzzed out – invoking said Assyrian Decider!

Deservedly however, their opponents, the team of Georgie Lewis and Julia McCahey prevailed in their attempt of striking a ball (which had been thrown by Mr North African himself, Jonathon Sear, onto the Penthouse of the receiving end) to land as close as possible to the last gallery line – very astutely accomplished by Julia to within 15cm and thus earning their way into the final. And all this while playing in the most fabulous camel costume I’ve yet seen on court. One really must behold this to believe it!

However, just as any Exhibition Street spruiker might extol – “But wait, there’s more!” – There is indeed more – and let the fun begin, because now the other half of this marvellous NATT begins with the accompanying Feast!

Catered for by our own marvellous Liza from the kitchen with some delicious horses doovers and a glass or two of something appropriate to whet ones appetite with. And so ably supported by Liza’s minions, Ben and Adam, (no offence Gentlemen – and next year Darius and Ayden may yet help out), the frivolity following the fabulous tennis begins with a sumptuous sit-down dinner, suitable for any Pharaoh, Shahbanu or Nomad. 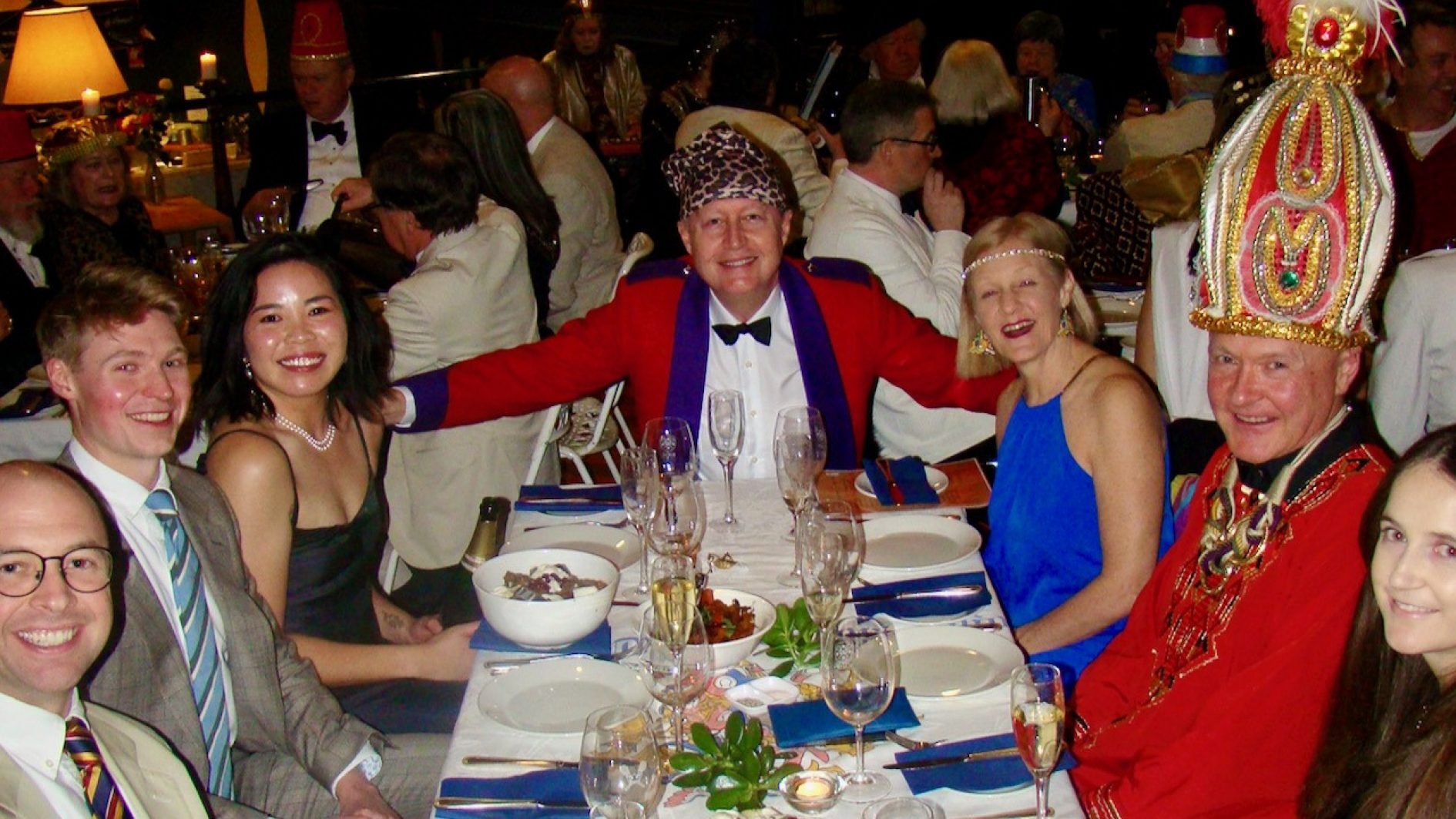 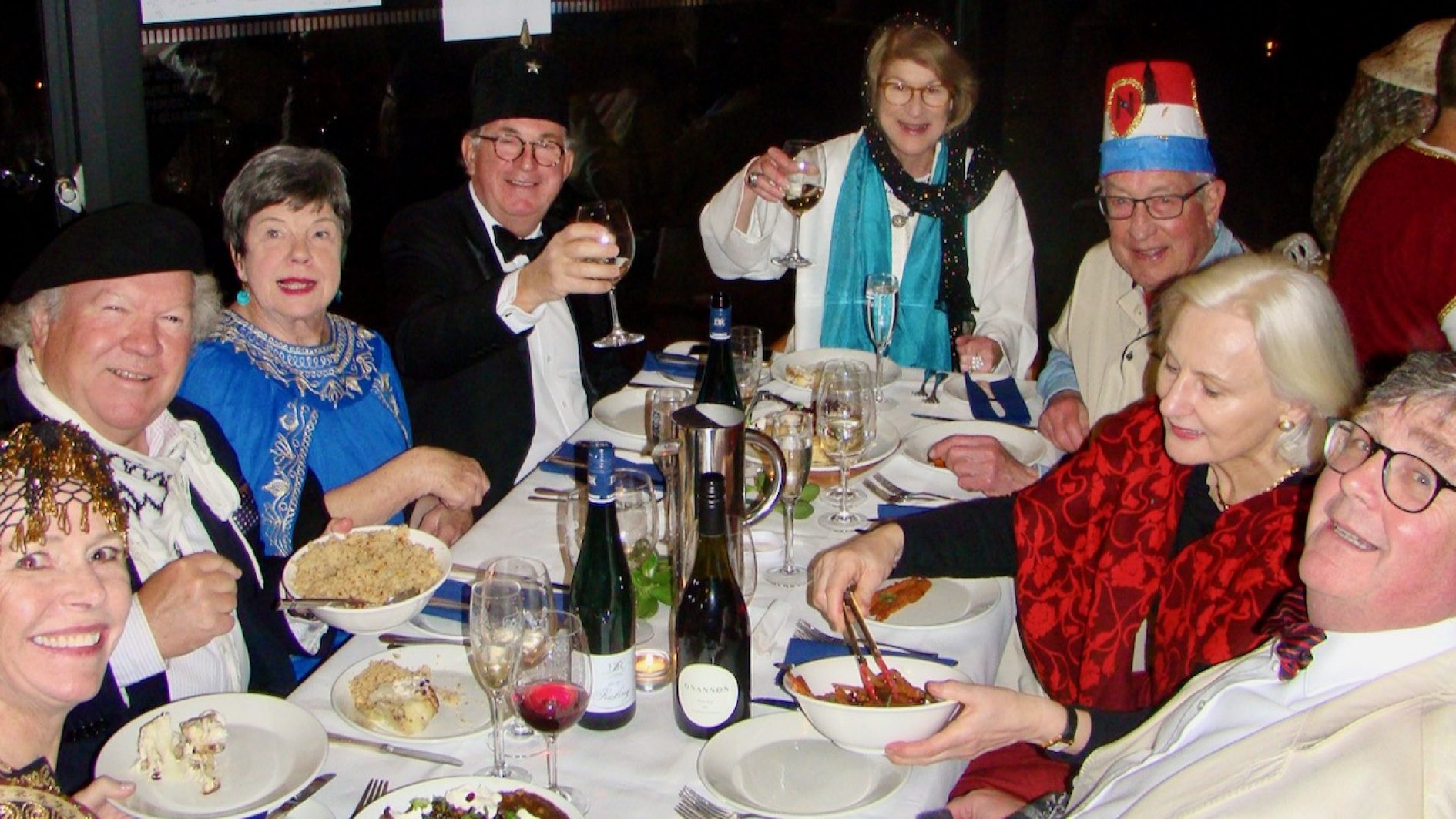 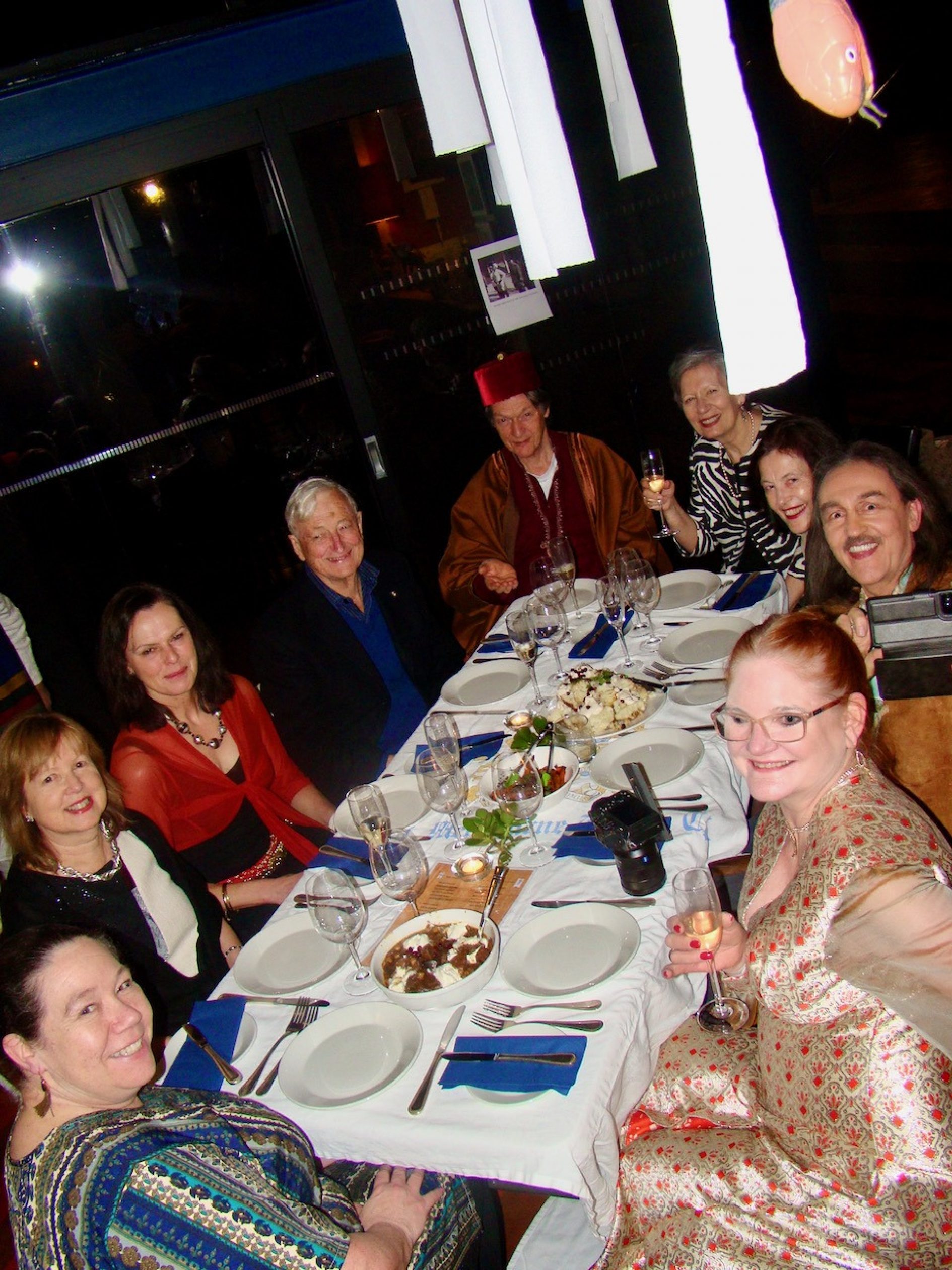 ...meanwhile back in Exhibition Street “But wait, there’s more!”

And indeed there is, for all the while competitors and dinner guests are being serenaded by the very talented Jo (on either the accordion or piano), and even eventually mesmerised by Josanna and her North African style gyrations, until we reach the crescendo of this little Gala being a rendition by the entire ensemble, of what is becoming the unofficial anthem of the North African – ‘Knock on Wood*’ from Casablanca! 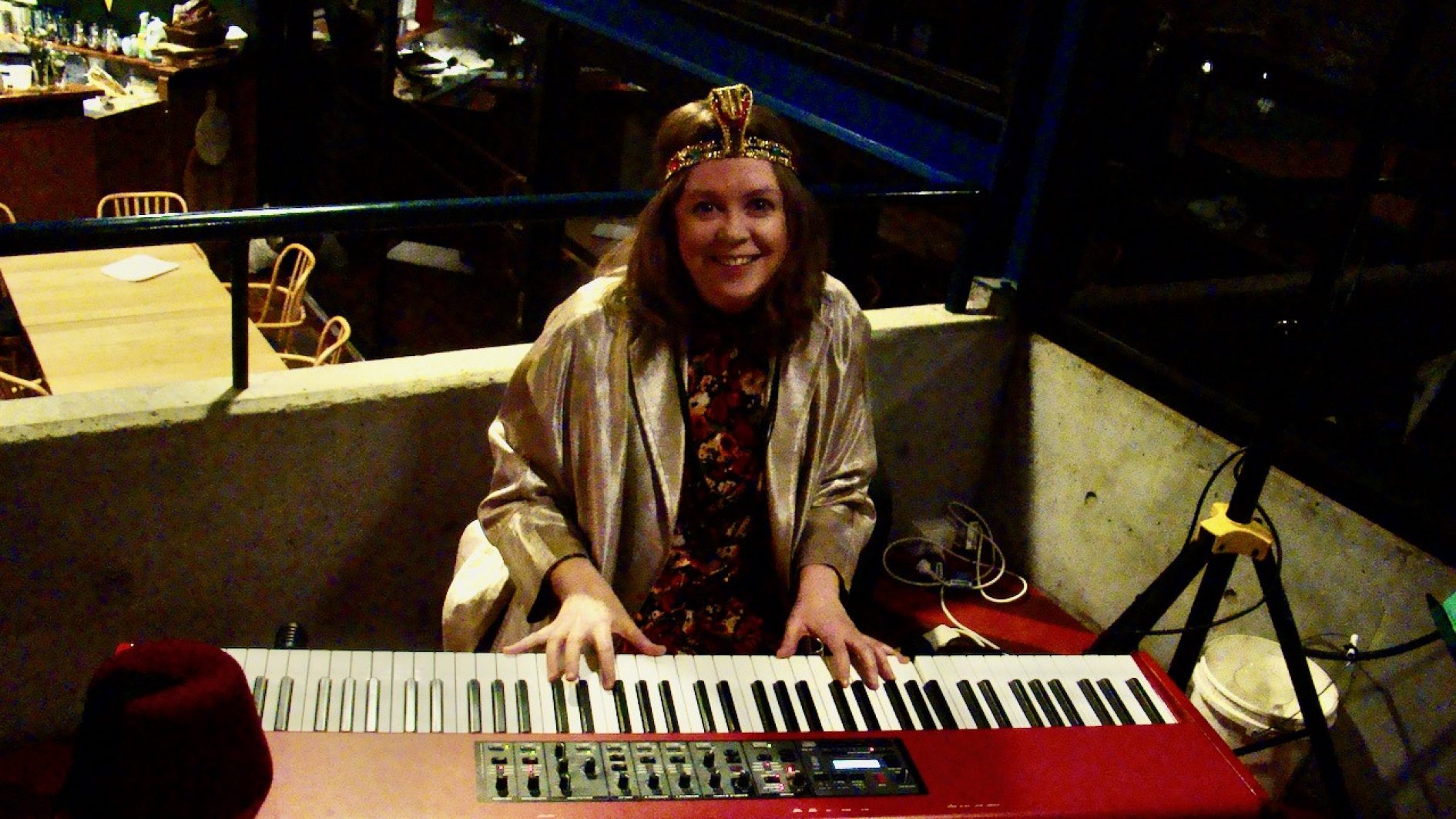 Is it little wonder that this event is oversubscribed? I tell you true, if they had just invented the North African Tennis Tournament in this day and age now, it would already be illegal!

In any case as we wind up this summary, and you dear reader peruse a few more photos of this marvellous event stay tuned for notice of next year’s balloted 2023 edition of the North African Tennis Tournament!

* with apologies to M.K. Jerome and Jack Scholl 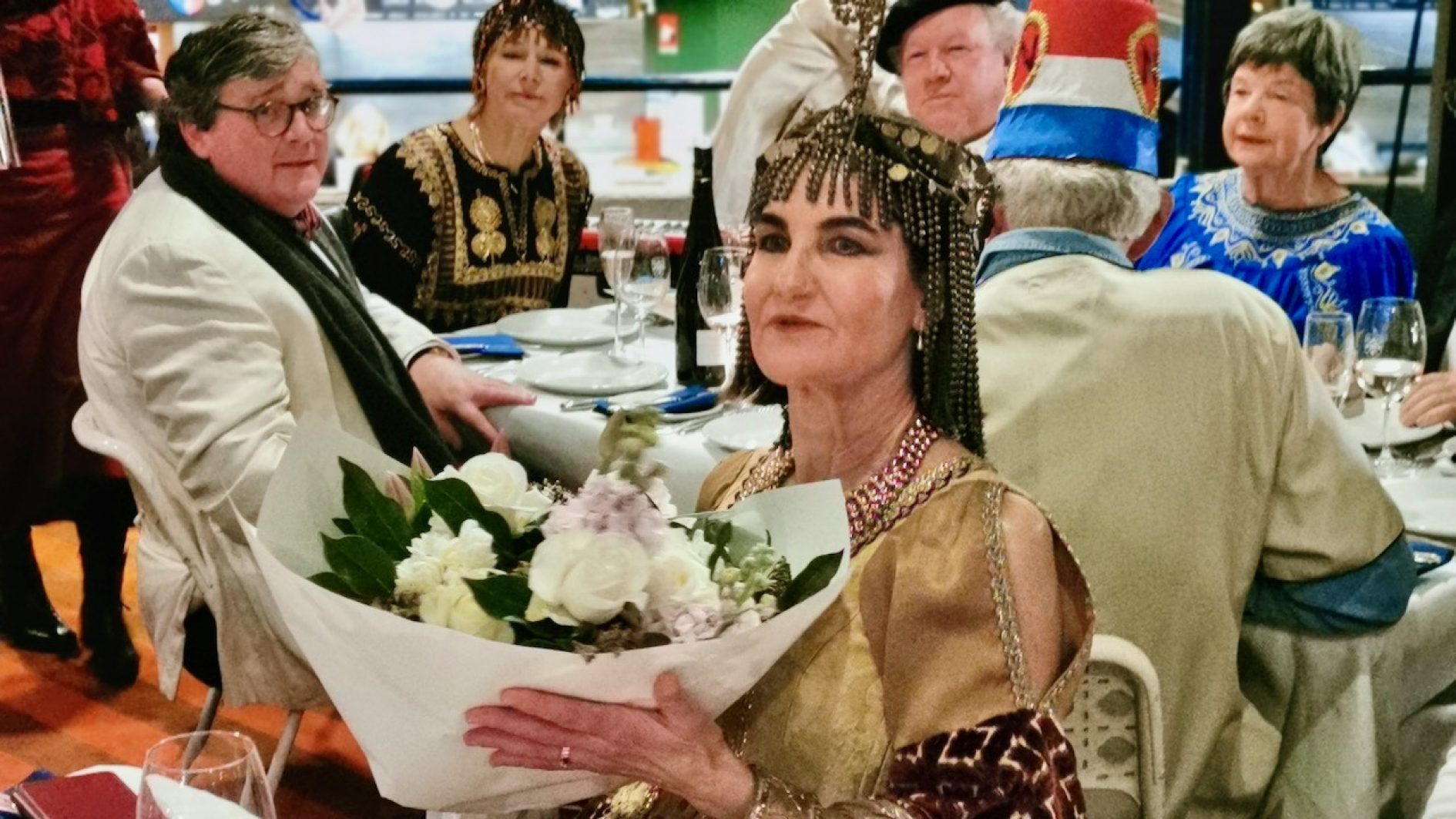 Big thanks to Lizzie Brown for organising and running the day and the dinner, also to Jonathan Sear for another excellent rendition of his brainchild.