Australian Amateur Singles – Friday-Sunday 2-4 Sept
The most significant amateur Australian tournament of the year. Calling all players under 20 handicap to get involved. All matches will be best of 5 sets so it will be a good opportunity to have a good competitive hit.

Ian D MacKinnon Internationality Handicap Doubles – Sunday 11 Sept
It’s that time again when you get to pick your favourite country and come and battle it out against the rest of the world for the title of (Internationality) World Champion. It should once again be a great day of tennis, food, costumes and fun. Call in at the Club or ring us at the pro shop to get involved and prepare your best costume and plate of food.

Barry Toates Trophy (RMTC vs SRTC) – Saturday 24 Sept
It’s inter-club pennant match season again and we are looking for a team of 8-10 players to take on the Sydney Real Tennis Club in our annual fixture, sign up to get involved in the tennis during the day and dinner at The Piano in the evening.

See you on court

Richmond Silver Racket – Sat-Sun 20-21 Aug
With many of the Club’s top players out of action for various reasons, a small field of 5 players took to the court to compete for the Club’s under-20 handicap tournament, the Richmond Silver Racket for 2016. In the first round Head Professional Frank Filippelli started well to take a 5/3 lead in the first set before the handicap and niggling shoulder and elbow issues took their toll and Hugo Pinsent clawed his way back to a 6/5 6/3 victory.

Following this match, two of the Club’s A Grade competition regulars took the court vying for a spot in the final. As Kieran Booth remarked after the tournament, last year he bowed out in the first round leaving blood on the court but this year it was his opponent who suffered that fate. Graeme Blundstone fought valiantly but was overcome by the superior strength and control of Booth who was able to control the handicap and the match. With Pinsent backing up from his earlier match straight into the second semi-final, it was always going to be a difficult task coming up against our fresh Assistant Professional John Woods-Casey and the back-to-back matches proved to be a bridge too far with Woods-Casey starting well and not looking back.

The final between Booth and Woods-Casey was a long affair, with the spectators enthralled in the three set match for over two hours. In that time many giraffes were served by Booth, to varying levels of success, most of which tied Woods-Casey down enough for the significantly stronger player to control the game to the extent required by the 30/owe-30 handicap. After a close first set was narrowly won by the weaker player, Booth improved his game with fewer faults and better length on his serves and much improved grille shooting and ran away with the match 5/6 6/2 6/3.

Congratulations to all entrants and many thanks to those who came to watch over the weekend including our President who was on hand to present the trophies. 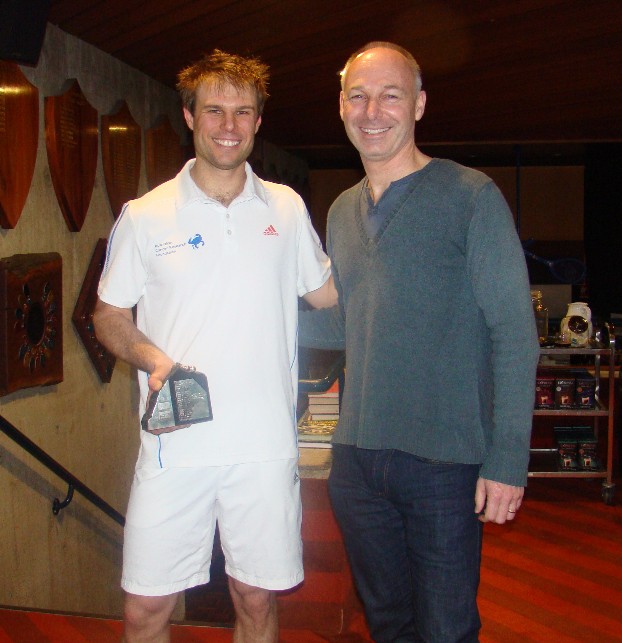 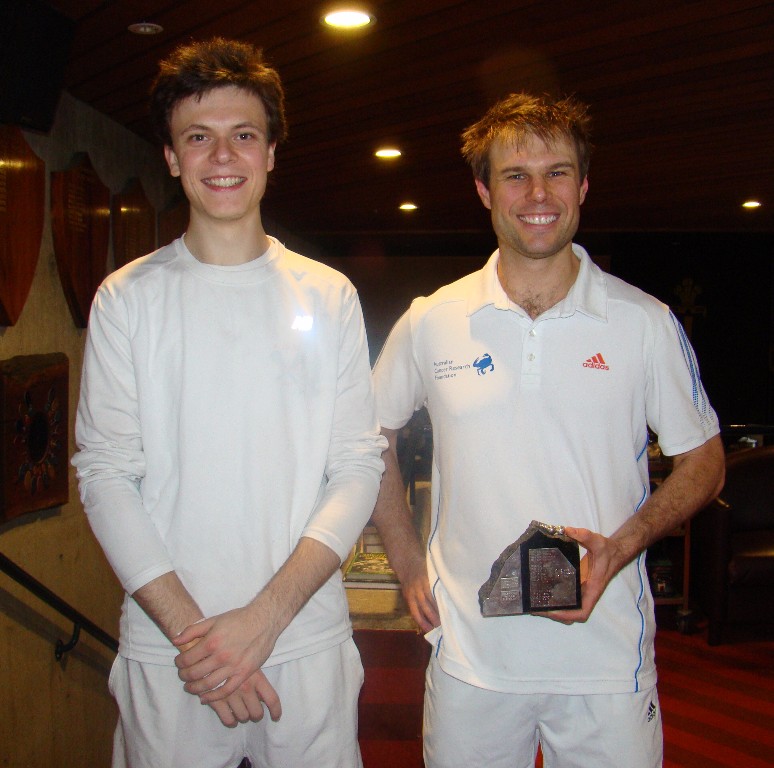