AT THE SOUND OF THE ALARM
• Go immediately to the nearest exit
• Leave the building by the most direct route
• Follow instructions by staff and/or fire wardens
• Meet at the east end of the club carpark
• If a person with a disability cannot be evacuated, assist them to a position as close as possible to an exit. Notify staff and/or fire brigade.
• Remain outside until the ALL CLEAR is given by emergency officials or fire wardens.

ANZAC Day Tournament – Sat 25 Apr
In the afternoon on ANZAC Day; open to 12 players of 40+ handicap and will run from 12 noon. Call the pro shop or sign up on the board in the club.

RMTC vs MCCRTS Interclub Match – Sun 30 Apr
We are looking for a good team of players from RMTC to show the upstarts from the MCC Real Tennis Section how the game is really played. Players of all abilities are invited to join the team, sign up or call the pro shop.

Exhibition St Cup – Fri-Sun 5-7 May
Open to players of any and all handicap, sign up to test yourself against the best players in the club. Knockout singles with all first-round losers going into a doubles draw, or just sign up for doubles. Sign up in the club or ring the pro shop.

Lunches are on!
Plan your life around lunch, that’s our motto here and twice a week this means that your life should revolve around the Royal Melbourne Tennis Club. Wednesday and Friday we have Evie in the kitchen preparing delightful delicacies for all and sundry. Invite your friends, colleagues and anyone who should see the strange game we play to enjoy the hospitality of our club.

ANZAC Day Tournament – Sat 25 Apr
We will be running a tournament in the afternoon on ANZAC Day. It is open to 12 players of 40+ handicap and will run from 12 noon. Call the pro shop or sign up on the board in the club.

RMTC vs MCCRTS Interclub Match – Sun 30 Apr
We are looking for a good team of players from RMTC to show the upstarts from the MCC Real Tennis Section how the game is really played. Players of all abilities are invited to join the team, sign up or call us in the pro shop.

Sydney Real Tennis Club Championships
The club championships were played at RMTC over the 7/8/9th of April. On behalf of the Sydney Club, I would like to start by thanking the President of RMTC and the committee for allowing us to use the club to hold our championships. We felt truly privileged to have access to the courts for the 3 days and once again marveled at what an extraordinary club you are all lucky enough to belong to. I would also like to thank the Pros for everything they did to make the weekend such a success including organising the draws, teaching the newcomers, ordering the trophies and for ensuring everything went to plan.

Seventeen players registered to play however Sav Cremona was forced to drop out on the morning of the event due to injury and Chris Cooper rolled his ankle in his first singles match. After 46 matches, we finished at 15.00 on Sunday afternoon with a host of divisional champions for singles and doubles. Hamish Oates walked off with the Club Championship Trophy for the top player of the weekend. 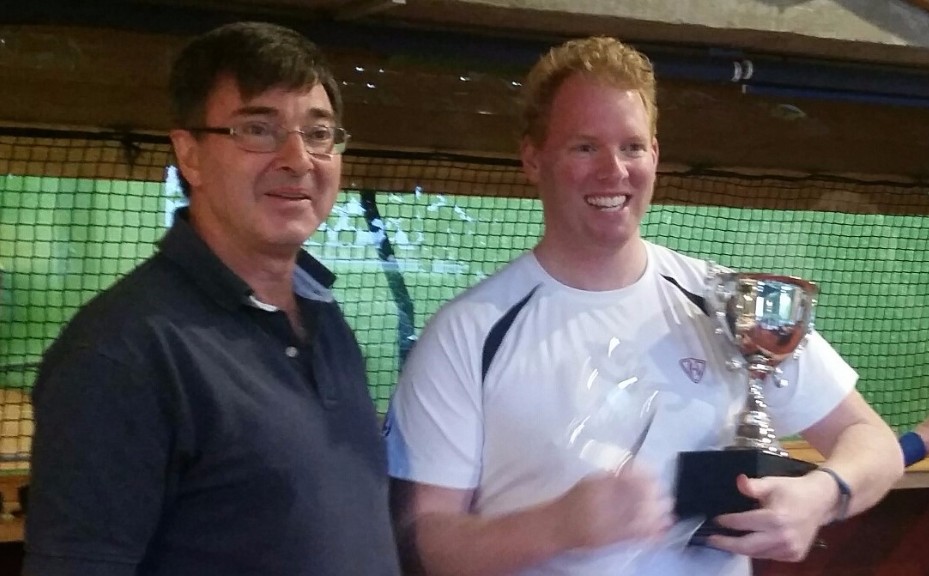 One of the main objectives of the event is to encourage new players to have a weekend of lessons and matches. This year we had three complete newcomers who picked up racquets for the first time on either Friday evening or Saturday morning and all acquitted themselves remarkably well. In the end, all of them played in at least one final. As a club with no court, being able to introduce new players over a weekend like this is invaluable for us.

Along with the tennis, we were able to join in on the RMTC social night on the Friday and be dazzled by Lizzie Brown’s cuisine and company. We then had a marvellous dinner in the club rooms on Saturday prepared by Liza’s Larder at which our club President David Pinsent handed out a selection of awards he had picked up at the $2 shop that all players had to wear for their first game on the Sunday morning. Dick Crane became so attached to his tutu that he wore it all day was still wearing it when he won the club handicap singles in the last match of the day! 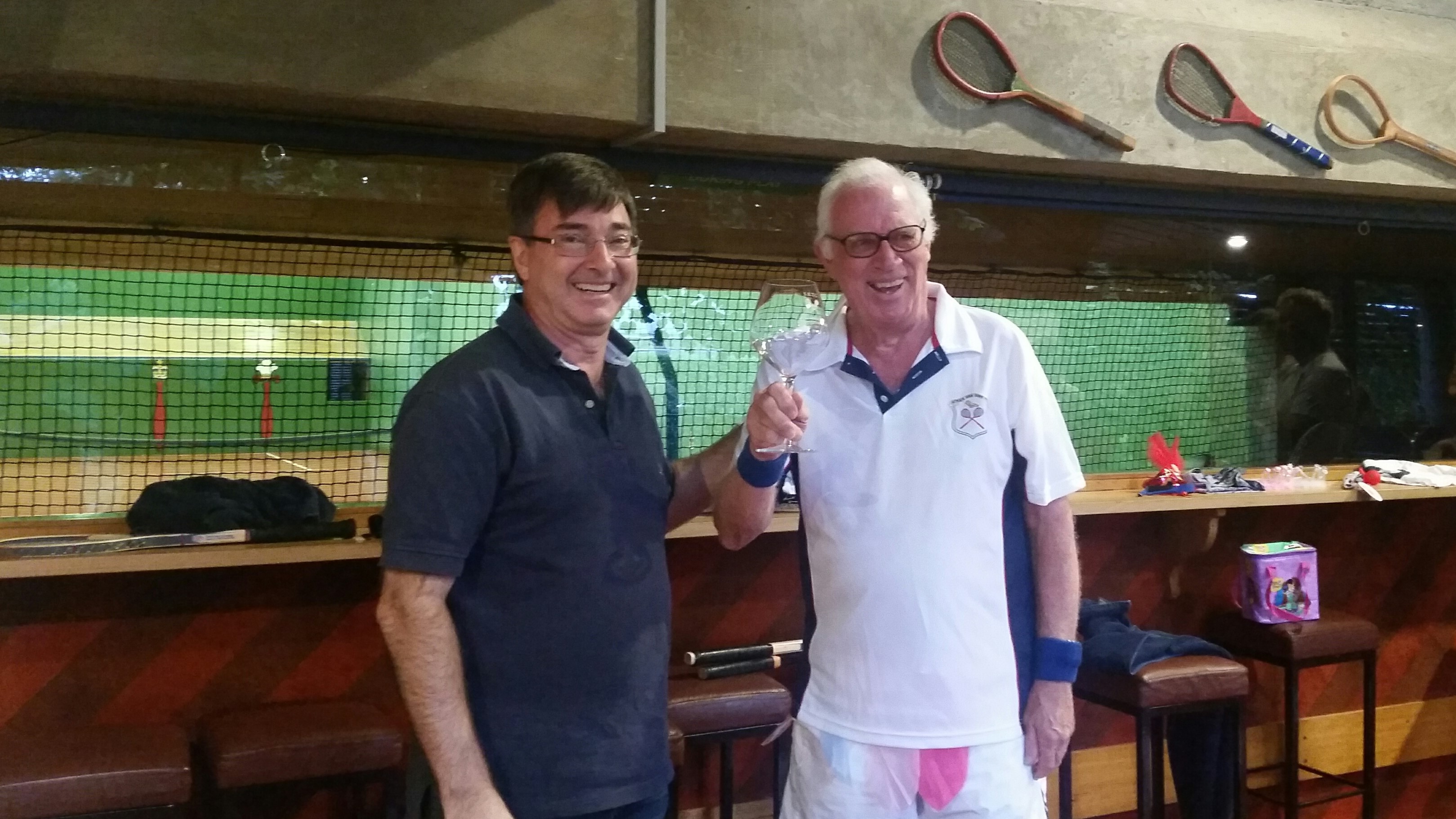 We would love to do it all again next year if allowed back and once more thank you for allowing us to rekindle our love for the game, introduce new young players and to cherish the camaraderie built over such a marvellous weekend. 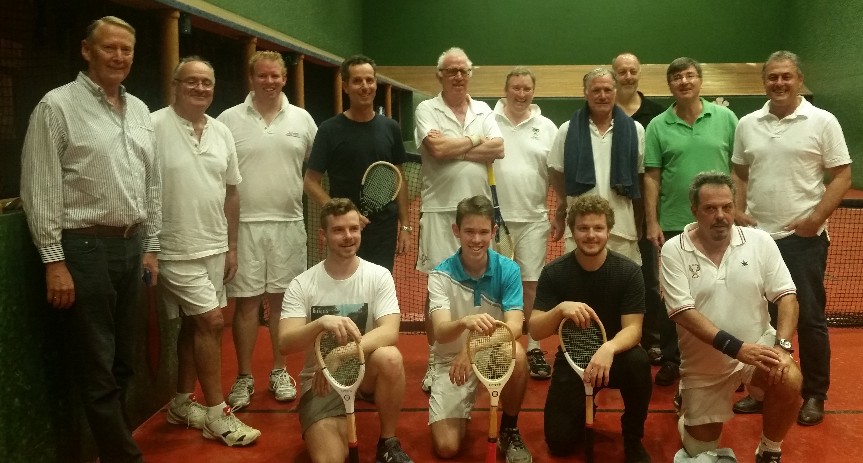 ANZAC Day Tournament – Sat 25 Apr
We will be running a tournament in the afternoon on ANZAC Day. It is open to 12 players of 40+ handicap and will run from 12 noon. Call the pro shop or sign up on the board in the club.

The Bathurst Cup is the Davis Cup of Real Tennis. Held every two years it pits the best amateur players from Australia, France, the UK and the USA against each other. Each match consists of two singles followed by doubles and reverse singles. This year Australia is represented by Kieran Booth, Peter Boyles, Bret Richardson and Paul Rosedale.

UPDATE 2 – DAY 2
Due to the format of the Bathurst Cup (singles, doubles and reverse singles) the doubles is often pivotal in who wins the overall tie when the teams are evenly matched. The doubles match against the French was no exception. Matthieu and Nicolas backed up from the singles while Bret and Kieran teamed up for Australia. The French won the toss and elected to receive so that they could determine the serving/returning pairs. Kieran served first and Nicolas received. The French team started off well taking it to the Australians who were trying to impose themselves on the match and as a result went for too much too early in the rally resulting in a number of unforced errors. At 4 all in the first set coach Pete (who’s “Dad” jokes are not as good as Bret’s) gave Bret and Kieran some simple advice “stop hitting the ball out of court or into the net and be patient”. It seemed to work a treat as the team went on to win 14 of the next 15 games to take the match 6/4 6/0 6/1, giving Australia the lead in the tie 2-0 with the reverse singles to come.

Bret was solid at the net, with his amazing reflexes wowing the French crowd, while he self proclaimed that it was “one of the best returning matches he has even played”, which for those people in Australia who have seen him play doubles meant he hit some pretty amazing shots off almost every return!!!

On the other side of the draw the British beat the US in the doubles taking an unassailable 3-0 lead in their tie and booking themselves a spot in the final.

After the match we went out for dinner and Peter Wright and Ed Kay from the British team joined us. Over dinner we heard about Ed Kay’s intelligent stethoscope PHD project which aims to diagnose heart conditions by matching a person’s heart beat to those on its database of recorded heart signatures. Ed also discussed the Cambridge real tennis structure for students of £80 yearly subscriptions, free tennis between 12-5pm when the court is quiet and racquets at 1/3 of the price. This structure seems to be a win win for everyone with the Cambridge University offering their students easy access to a unique sport, the club getting better utilisation of their facilities, and a number of top level amateurs and touring professionals being produced improving the general level of real tennis in local and international events.

Next up for Australia is the reverse singles with Kieran to play Nicolas and Pete due to play Matthieu, with one win required to reach the final. 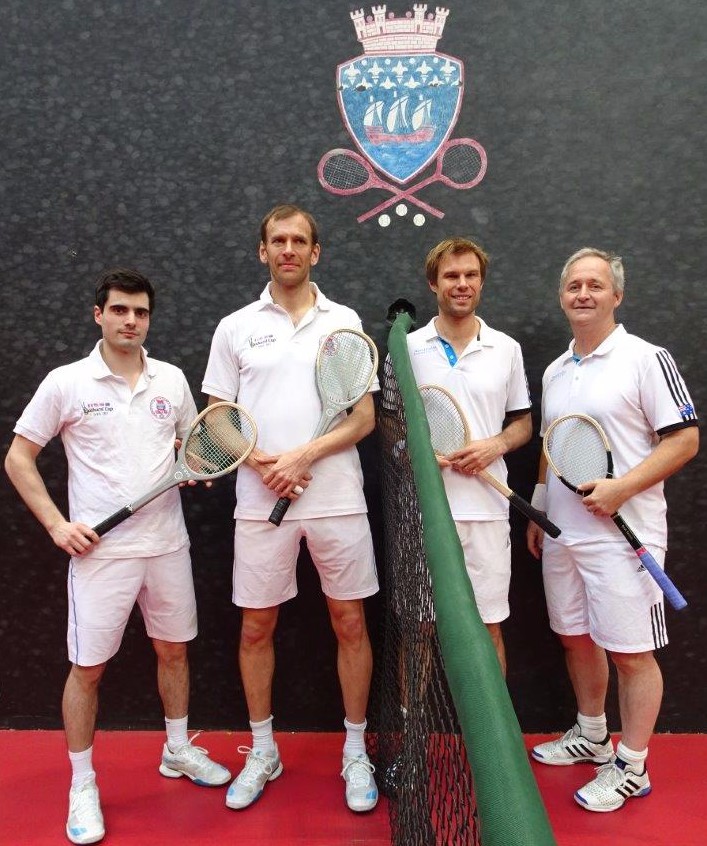 UPDATE 3
Australia has won the Bathurst Cup for 2017! While waiting on the official report, suffice to say that Kieran didn’t drop a match and the doubles pairing of Kieran and Bret were unbeatable. The final result of the final between Australia and Great Britain was 3/2. 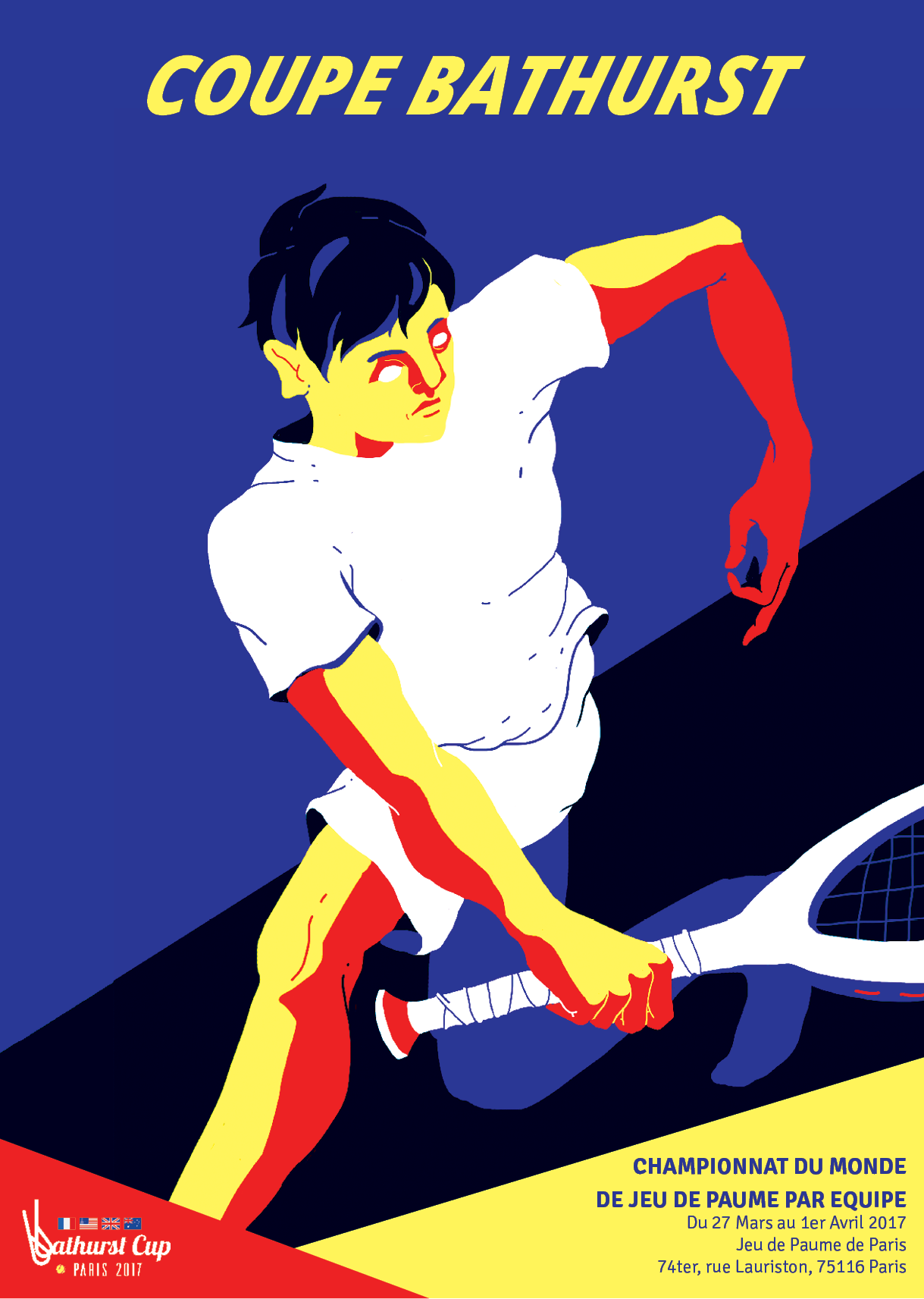 Young Members (U35) Autumn Tournament
Saturday morning saw 9 young members contested the first U35 Tournament of the year. Great to see a few players making their debut on the circuit: Eli Kozma, Rex and Reggie Michelson. On the North court, some creative juggling of the draw was involved as one player missed his train. 3 of the 6 matches were decided by a game however one player definitely had his weetbix that morning. John Moran was chomping at the bit from start to finish, finishing undefeated against Eli, Dafydd Camp and Jo See Tan. His enthusiasm was unfazed in spite of facing Eli with a 29 handicap difference at one point.

On the south court, 10 rubbers were contested between Sarah Butler, Annie McAuley, Emily-Ann Nash, Rex and Reg. Although there were even contests between most players, one true king emerged undefeated. Reggie blitzed through all of his matches, with Emily-Ann coming closest to dethroning him, taking 5 games. Perhaps it was the properly strung racket which made the difference to his game in this instance.

In the final, John faced Reggie owing the maximum handicap. A little bit of crowd participation guided Reggie throughout the match, having never played chase restrictions (“leeeave!”, “hit it!”). Despite the crowd backing the underdog, John’s steady serving and clear head proved the winning formula, taking the match 6-2.

Congratulations to John for playing terrific tennis all day. His form is looking good in preparation for the Clothier Cup coming up in the USA mid-year. Great to see the club thriving with enthusiastic young members. Big thank you to John Woods-Casey for organising the draw and Jonners for steadying the ship throughout the day. See you all at the next one!! 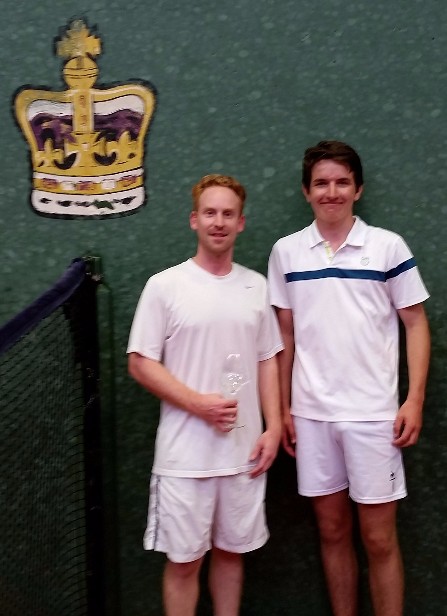